Which way do we go?
Are we on the right climb here?
​Ha! That's no walk-off! 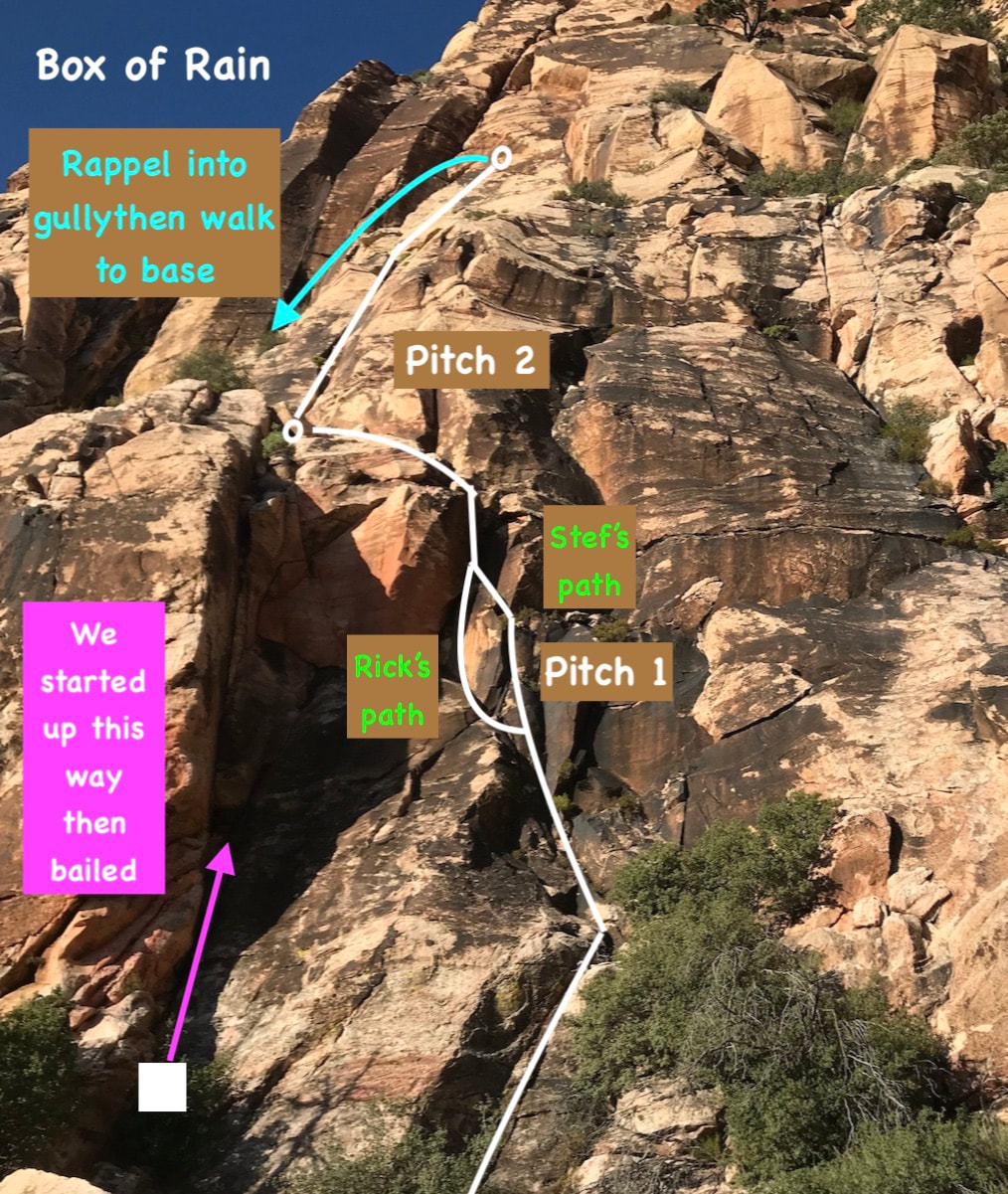 Climb: Box of Rain (Trad, 200 feet)
Area: Stick Gully
Rope & Gear: We used a 70m, We used both a #5 and #6 and some smalls (and yeah, stuff in between... It takes a big range of pro)
Good Lead for a New Trad Climber? No. Do you like offwidth? Pitch 1 is pretty spicy. Pitch 2 is a bit squeezy.  Route finding can be a bit confusing - although everything probably ends up in similar spots.
Conclusion WTF? What the FEISTY!
We THINK we got on the correct climb, but we aren't real sure...

This is a Mountain Project-only climb (i.e. not in Handren) and it has a very, very blurry photo taken from about 800 miles away. There is a written description of the climb, but it seemed to fit two spots. There was mention of going up a slab, to a jumbled mess of corners, to an offwidth, to a chockstone, then to more offwidth, then taking a crack that goes off to the right. We couldn't tell from the description what was where and how far up.

The left crack (labeled in pink in the photo above) has a slab going to an offwidth, and there is a good sized chockstone at the top of the offwidth. Plus, it's pretty jumbly... but Rick quickly got deterred on the slick, lichen-covered slab.

The path we ultimately chose to the right wasn't all that slabby, but there's definitely a jumbled mess of corners, and an offwidth, but no chockstone - but there was a good sized boulder capping the offwidth. Is that what is being called a chockstone? I have no idea! So... we either did Box of Rain or we didn't and we did some first ascent, which we could call another Grateful Dead tune ("Althea," after our dog, maybe? Or "Touch of Grey" for the grey-colored rock? But we'll just say we did Box of Rain!)

Did we like it? Actually yes, we did. Admittedly we were pretty worried about it before hand because it is so obscure, there is very little information, and there are zero ticks and comments. Whatever it was we did ended up being a diverse, feisty, interesting climb that we enjoyed (of course you have to be tolerant of off width for this one...)
Pitch 1
Pitch 2

The descent descriptions mentions walking off left into the gully. We scoped it out and it's not a walk-off, it's a tricky, exposed, down-climb. The bushes are too small to rappel from, so we left some nuts and tat and did a short rappel (climber's left) down into the gully. Now there's an anchor for you! But bring spare tat in case ours disappears or becomes faded in the UV.