Curious about the details of how we do this? Then this page is for you!
(1) GPS UNITS:

We use professional-grade GPS/GNSS units with "differential correction" that have sub-meter accuracy (<3 ft). While high-end smartphones and recreational GPS units may have similar specs, there is a large difference in accuracy due to the antenna and the internal software that processes the locations. For example, iPhones and Samsung's GS series have GNSS receiver chips on board, but the antenna is not nearly as robust as professional units and the processing software implements power duty cycles (to save battery). The antenna quality and the power duty cycles contribute to cycle-slips which is where the unit loses exact location but continues to show/record location measurements that are offset.

Due to these deficiencies, cell phones and recreational GPS units are inherently less accurate.

What is GNSS and why is it important? GNSS refers to all global navigation satellite constellations managed by other countries (Russia, Europe, China, and Japan). Because of the additional satellites being received, GNSS allows the units to work better in terrain features like canyons because more satellites = more triangulation and increased likelihood that there are satellites in the limited “sky” available in a canyon.

Power Duty Cycle (*1): a mode where the GNSS chipset is only active for a fraction of each second to reduce power consumption
Cycle-Slip (*2): a discontinuity in a receiver's continuous phase lock on satellite signals

We are not using satellite imagery as the background for the maps because:

(a) The satellite imagery does not have a high enough resolution for the scale we are using. Imagine your photo getting grainy and pixelated when you zoom in. You have exceeded the ability of your zoom lens, so to speak. Most maps are at a scale of around 1:24,000. Our maps range from 1:2,000 to 1:800! Very detailed!

(b) Places like Red Rock Canyon and Joshua Tree have so many rocks and formations that satellite imagery just looks like a mess on the map! We hand draw in the key reference formations to help with navigation.

We do use satellite imagery and digital elevation models, such as LIDAR, in processing the map. In fact, we utilize multiple (3-5) sources of imagery. We use this many sources not only because imagery tends to have poor resolution but also because of variance in accuracy between different satellite sources (think about how different a rock wall looks taken from one angle compared to another).

By using 3-5 satellite/imagery sources with our accurate GPS data and associated on-the-ground photos, we can triangulate, reconcile, and corroborate locations of rock and terrain. These efforts significantly increase the accuracy of the map!

If you are curious about satellite/imagery accuracy relative to GPS points try this:

Monkey Face tower at Smith Rock is an iconic formation. In reality it stands straight upright, but the angle of the satellite when that frame was taken shows a different perspective. What's on the image is not accurate and does not represent reality – the tower does not lean left and the trail does not go to the right of (or through) the tower. Now try to zoom in. The image becomes greatly distorted. You have reached the limits of the imagery.

Another example: The photo below shows a LIDAR elevation model for Smith Rock that is completely missing the huge formation between Cocaine and Aggro gullies. This imagery also cannot differentiate the boulders that lie at the mouth of each gully. Rick has applied his decades of GIS experience to fix this issue (see the middle image? Rick fixed that and has sent the fix to the state of Oregon.)

It takes a lot of time and effort to make accurate, high quality maps! 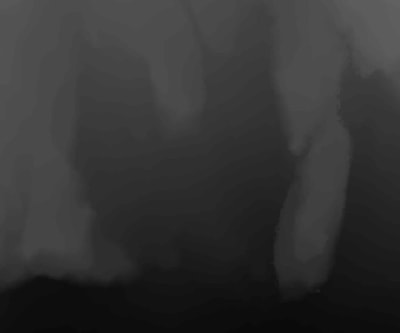 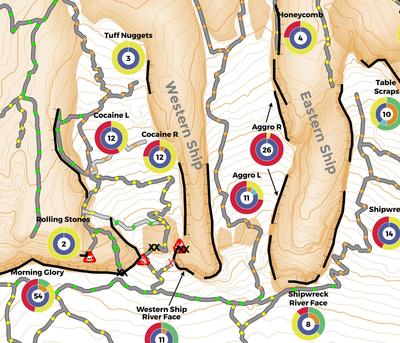 Climbing walls are GPS’d with end points taken to define the boundary of each wall. We do this by locating, physically walking to, and then marking the first and last climb on each wall. We also attempt to walk the entire length of the wall, as close to the wall as possible to get its shape (this is in addition to walking any trails up to/at/near the wall which are the trails shown on the map), which is also triangulated with the 3-5 sources of satellite imagery referred to above.

If there is a “peripheral” climb associated with a wall (e.g. a climb that is off by itself) we mark that climb separately and do not include it with the boundary of the main wall. We will show peripheral climbs as a dot on the map with the name of the climb next to it.

Vegetation on the map was derived from NAIP satellite imagery using the NDVI method, which is a long established method of deriving land cover using the infrared bands. Thus, the locations of the “greenery” on the map does correspond with actual clumps of vegetation. We have received lots of thoughtful feedback about representing vegetation on the map. In desert environments the location of vegetation can help with orientation. For example, it is helpful to show a highly vegetated gully because it could be used as a reference point for navigation. We aren’t necessarily showing a single bush located on a rock, although it is close on the super detailed maps. In some areas, though, we will show a single pine tree, if it is a key navigation point!