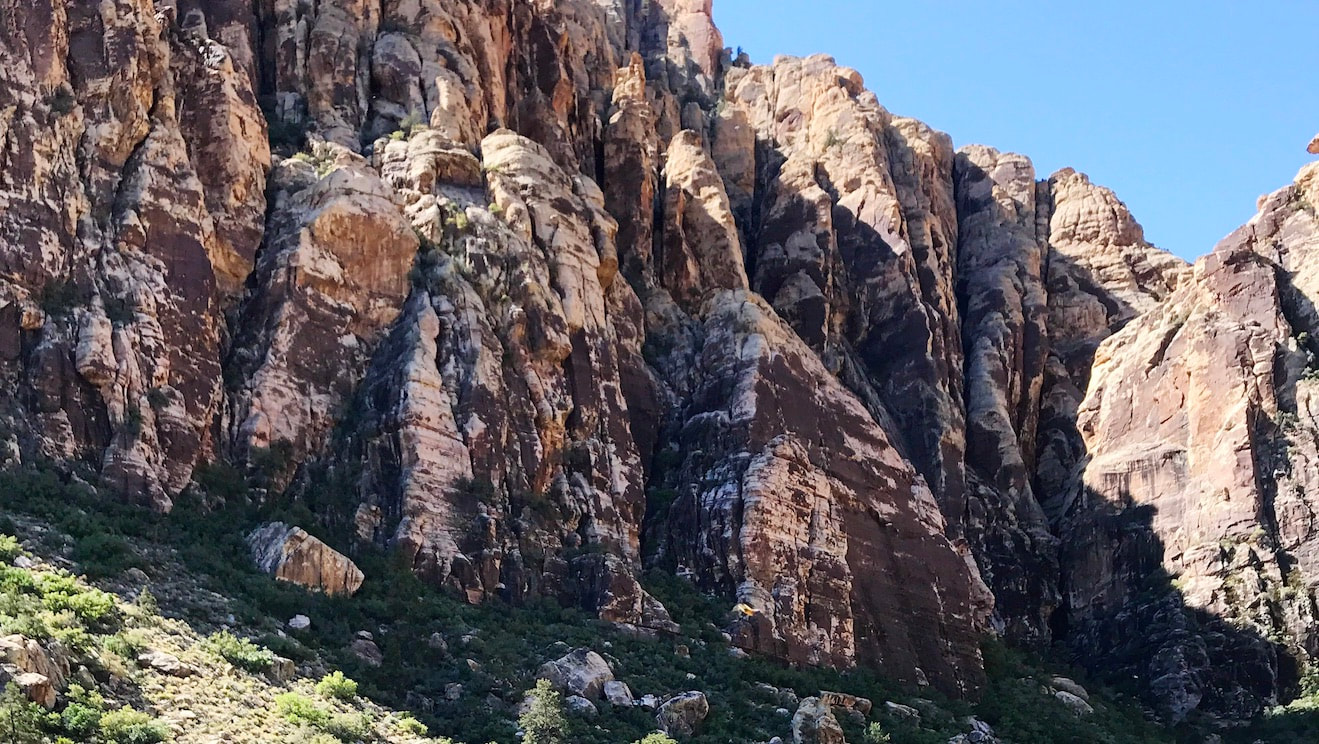 Sorcerer and the Kidney Stone

*NOTE: This climb was completed before we began the WTF 5.7 Tour. Stef wrote this story after her experience and published it in her online magazine Common Climber and is sharing it for your reading entertainment here.

​We chose Necromancer wall because of its short multipitch climbs, morning shade and proximity to Ice Box Canyon – which exhales cool air from the mountains above. Previous daytime highs were already hitting 97 degrees F in the Las Vegas valley and low 90s at the slightly elevated Red Rock Canyon, so we needed to stay in the shade and climb fast to minimize exposure to the approaching wicked heat. To boot, Necromancer is covered in a beautiful black petina that can quickly reach finger-searing temps. The wall itself tops out at just around 300 feet, which should easily be doable in the shade-time we had.

As we arrived, things instantly became busy when several parties emerged from different trails almost simultaneously. Everyone quickly scattered along the base, claiming various climbs. The options rapidly narrowed and, by default, my husband and I ended up on Hop Route, a sand-bagged 5.7+ trad climb that begins with a wicked bouldery off-width that, as we discovered, is not just the “start” (as certain descriptions state) but, instead, continues for another grunt-worthy 30 feet (side note: after many empirical experiments we have confidently determined that the + symbol after a grade translates to “fucked”). Eventually the climb moves into a nice, prominent hand crack with excellent complementary face features – certainly deserving of the stars that decorate it in the guidebooks.

Although the hike to the wall produced sweat, once in the shade, I felt mildly, welcome-ly chilled. During a long pause, when Rick was building the anchor at the end of pitch 1, I held onto the brake-hand of the rope and ruminated over the word “Necromancer.” I wondered about the name’s history (Is it from the black color of the wall, covering it like a sorcerer’s cloak? Or, is there a historic death story?). I pondered the morbid energy of the name then shoved premature thoughts of death aside. I chose to take a merrier thought path, chalking the name up to the poetic license of naming climbs – no different from “Smears for Fears” or “Clip It or Whip It.”

The chill of the shade continued to draw heat from my bare skin and goose bumps started to form on my arms. Then, just as I found myself wishing I had a jacket, I heard Rick yell “off belay.” I replied with “belay off” and began the routine of getting ready to climb. Before leaving the ground I felt some mild abdominal discomfort that extended around into my back. Since abdominal pain is not unusual for someone with colitis, I used the standard tactic – I ignored it. Climbing often has a great way of making pain go away.

Upon arriving at top of the first pitch, I organized the gear to lead the second pitch and the abdominal pain was intensifying – still nothing I couldn’t handle. I was ready to climb. I studied the wall and realized at that moment, I hadn’t actually read the route description or even looked at the route photo. Ooops. There were several options for lines, and I wasn’t sure which was the route. But it all looked featured and easy, so I chose a nearby line that was protectable.

After about 30 feet of climbing, the pain rapidly shifted from uncomfortable to nearly intolerable. I looked down to Rick and let him know I was really hurting, but was going to forge on. I continued upwards and eventually my thoughts went from “cool rock” and “neat climb” to “move faster,” “this hurts like hell,” and then, ultimately, “I need to get the fuck off the rock.”

I quickly realized this wasn’t just my usual abdominal discomfort. My right back flank below my ribs was screaming and the pain radiated completely around the right front of the abdomen. I reached a point where I could barely move. I could barely breathe. I could no longer hold back verbal moans, groans, and statements of “ooowwwww” and “ffuuuucccckkkk” with each step upwards. I really, really wished it was gas so could it be relieved with some sort of flatulent blast…but gas this was not.

I tried with all my might to stay focused on the climbing and placing pro, but the pain kept making itself front and center. I realized I was now unsafe climbing on lead. I needed to find a spot to build an anchor, bring Rick up, and let him finish the climb. When that realization hit me, I saw the current location was no good for any pro. But, just above me, perhaps another 10 feet, it looked more featured and another crack began.

I climbed to that spot, placed two pieces in horizontal pockets and another piece in a small vertical crack. I quickly built the anchor and put Rick on belay. The pitch was almost finished but by this point I was moaning uncontrollably, fighting off puking, and staring to cry. I leaned my body against the rock – feeling comforted by its earthly presence. I wasn’t afraid – just in extreme pain.

To give you a perspective of my pain tolerance – I gave birth to my son, without drugs and didn’t cry. I cussed a lot, but never once cried. I didn’t even cry when the doctor had to do an emergency extraction of an attached, retained placenta post birth – which, against the doctors wishes, I also did without drugs – I cussed up a storm, but no tears. I have had my gall bladder removed, and the gall bladder attacks didn’t even come close to this pain. And, after a hysterectomy, I refused narcotics, only using Ibuprofin. What I was experiencing on the Necromancer wall fucking hurt. It hurt so badly I actually began to wonder if I was going to die. Then I thought “although I’d certainly appreciate the irony, there is no fucking way I’m going to die on the Necromancer Wall.”

As I was bringing Rick up, a man on an adjacent climb emerged over a ledge. He was leading on a tricky section of his climb and I was certain that my moans, “ows,” and whimpering tears were reaching his ears. I tried to hold back the sounds, not wanting to disrupt his peaceful climbing experience, but it was nearly impossible. As he passed me, he asked if I was ok. I told him I wasn’t sure what was wrong, but that I was in severe pain. I apologized for any distractions during his lead. He was kind and reassuring then climbed to the small tree about 15 feet above me and set up his anchor.

Rick arrived, we switched him over to lead and then chatted with the gentleman above. We decided it would be quickest for Rick to cut right, go past the tree belay to the low fifth class terrain directly above. This would allow us to complete the climb as quickly as possible. The woman seconding the adjacent climb soon arrived and the couple kindly waited to start the third pitch until after Rick put me on belay. They allowed me to pass for our own speed, but they also wanted to follow me, should any assistance be needed.

Ultimately all four of us ended up at the top at about the same time, so we used both of our ropes on the rappels to speed up the descent. By the time I reached the bottom I was still in mild pain, but it had subsided to the point where I could walk and hold a conversation. By the time I got to the car, it was hot, I felt beat-up, but I was celebrate-ing-ly alive. The necromancer would have to wait to have his or her conversation with me. (Had I still been experiencing the intensity of pain I had on the wall, the hospital would have undoubtedly been my first stop.)

Post-climb research revealed two things – one, the line I took for the second pitch was incorrect and, although I’m sure plenty of people have taken the same path I took, it’s not recorded in guidebooks or on Mountain Project. Two, it appears that I passed a kidney stone on that climb. I’m not claiming any kind of first ascent, but I am going to take this moment to commemorate a pitch two variation of Hop Route on Necromancer Wall and call it “Sorcerer and the Kidney Stone.”

A Few Notes on Kidney Stones: