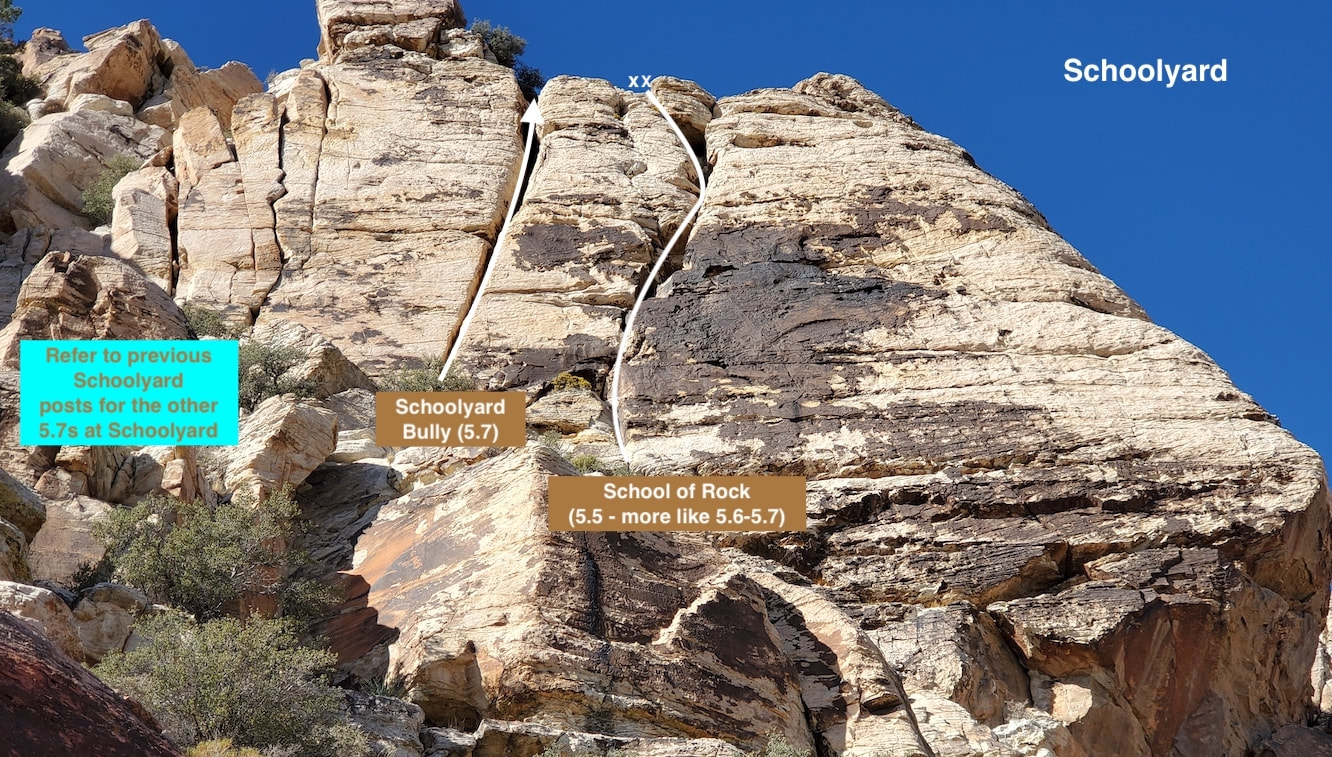 ​CLIMB: Schoolyard Bully (Trad - more like free solo, 5.7) (1 pitch)(~120')
WALL: School Yard - Right
PROTECTION: Really not much, recommend top roping after leading School of Rock. It was too wide for our #7, and we'd guess even a #8 because it opens wide inside the chasm. Descriptions say there are horizontals for pro. Not really - there were a couple possible shallow spots with junky rock that might be mental pro more than anything. The first possible spot for pro was about 30 feet up. the next one was another 30-40 feet up.
BEGINNER LEAD: No.
Conclusion WTF? What the FUCK!
It took us forever to get done with the Schoolyard Wall and now we are finally finished with it!  There are five 5.7s across both sides of the wall (left and right) that we completed in the three different trips. Although Schoolyard Wall is at the entrance of First Creek it is actually an ass-kicking approach and takes about 1.25 hours to get to.

The climb Schoolyard Bully is the third WTF'r out of the five 5.7 climbs (and who knows, maybe Deja Vu is also a WTFr too - we just weren't able to finish it so we called that one a What the FAIL!)

The name Schoolyard Bully fits. It goes from grunt-hard offwidth to fun chimneying. The descriptions in other resources say there is protection in horizontals - well, not so much (and Handren says a few 6"-8" are nice - but we brought up to a #7 and that wasn't even close to being able to work.) Out of 120 feet, there MAY be a spot for a sketchy shallow horizontal in crappy rock. This is pretty much a free solo if you lead it. Or you need some BigBros.

Since we were unable to see protection, we decided to lead the climb to the right called School of Rock to set up a toprope for Schoolyard Bully. School of Rock is rated a 5.5 in both Mountain Project and Handren, but we felt like it was a solid 5.6 with some 5.7 moves if you are shorter than 5'7"ish (Stef is 5'5", Rick is 6'0").

School of Rock sucks. It is on some pretty crappy rock and requires a lot of concentration not to pummel your belayer or fall from breakage. Fortunately it does have good protection. Stef ended up using larger gear #4s and #5 on that climb,

At the top of School of Rock is a bolted anchor, but we had to build a gear anchor to be able to toprope Schoolyard Bully. We used one strand of the 70m rope to rappel down and was tied into the other side to climb. We belayed from above. Descent is rappelling down Schoolyard Bully with a 70m.