A WTF'r!
And a What the FAIL! Oh, No!
Arghhh, three more climbs left 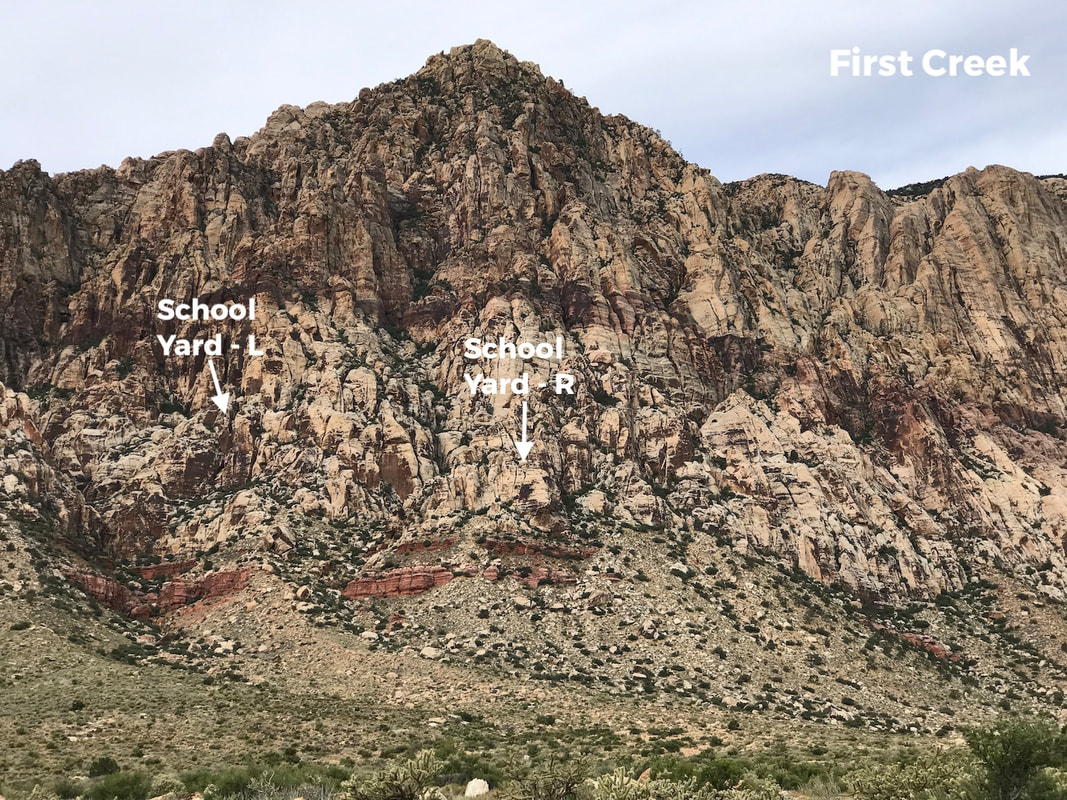 The School Yard is an "old school" area, sees very few visitors, and has very little information (Is it a walk-off? Or, is there an anchor? Any beta? Nope...Your guess is as good as mine...).

There are five 5.7's at the School Yard and we intended to knock out all five climbs. But the climbing Gods had other ideas - we ended up only doing two. BOTH of which were in the "What the Fucker" territory. Rick's climb, Deja Vu, was a "What the FAIL!" and may have been a WTF'r, but he got frustrated and decided to bail. The second climb, called Short Subject, which I lead, was a "What the FUCK!" It was difficult from bottom to top (that ain't no 5.7!) and the top was chock full of a lot of freaky, loose rocks (which impacted our plans to top rope Dunce's Corner.) (climb details below).

Dunce's Corner is rated as a "bomb" on Mountain Project. We usually try to top rope "bombs" in an attempt at self-preservation. However, the sheer amount of loose rocks above that climb was too dangerous to top rope, leaving us with the decision that we will have to lead it - if we dare. But after two side-swiping climbs in a row, there was no way in hell we were leading that climb today!

​To add to the mix, the approach to the School Yard is no gimmie. Like its neighbor Mt. Wilson, the "front side access" is deceptive (i.e. it's farther than it looks), plus it's steep and loose. In addition, getting from the far left end of School Yard (location of Deja Vu) over to the other climbs, is about 30-40 minutes of loose, steep hiking (see the above photo). Ya' know, you can only take so much fuckage in a day, so we quit while we were behind.

The three remaining climbs we need to complete at the School Yard are:

Dunce's Corner - 80 ft (rated a "Bomb" on MP. Oooh, fun. This is the one we hoped we could toprope, but looks like it will need to be lead.)
Sunday School - 100 ft (why do I think this might not be as innocent as it sounds.?)
Schoolyard Bully - 120 ft (an offwidth that needs 7s and 8s.... hmmmm, we don't own those yet... time to invest? Rick says he refuses to buy the big cams because that means we'd have the tools to do off-widths. If we don't own the gear we can't do the climbs right?! Totally expecting a struggle fest with this one. Hey Irene (Lady Lockoff) - wanna join us on this one?!)

Rick retreated to where he could get out onto the face then angled up and right. He could see the terrain above the roof turn lower angle and into what looked like poorer quality rock (which is confirmed in a description of the adjacent climb - called Return of the Jedi, 5.9 - when someone decided to extend that climb and finish up on Deja Vu.) By that time, Rick decided he was "over it" and was lulled to the nice-looking crack leading leading up to some bolted anchors on Return of the Jedi. (That was actually a fun ending...)

This is only the third climb we haven't finished. The first "What the FAIL" was The Wonderful World of Shrimp at Cowlick Crag and that was because there was a moving block of rock with a critical hold and Rick didn't want to pull it off and crush me and Althea below. The second FAIL, was Pre Skool at the Graduate Cliff. We bailed at the 2nd pitch because it was freezing cold and I was experiencing the screaming barfies in my hands and I couldn't hold onto the rock (we are going to go back and redo Pre Skool.) This was the first time we bailed because the leader just didn't want to finish the climb.

Understandably, Rick felt frustrated and defeated. He certainly wonders if there's something he missed, or maybe he should have experimented with the moves near the roof. But then again, maybe going out onto the face lower down (where you can actually get out onto the face) IS the way to do the climb?  Who knows...

The climb actually wasn't bad up that point.

I didn't make it up to the roof either because I was following the gear Rick placed after his downclimb and traverse. From what I could see, I agree, it looked quite difficult, if not impossible. The top half of Return of the Jedi was actually pretty fun - a distinct crack in black petina - and a little spicy getting to the bolted anchor.

At the time Deja Vu seemed like a What the Fuck'r. In retrospect, we can't really say because we didn't we didn't finish the climb, we didn't actually try the roof, and although what we did climb had some spice, it wasn't that bad. So all we can really give Deja Vu is a "What the FAIL!"

The climb tops out on a ledge (that is also covered in loose rocks). Watch out for the climber below as you bring him or her up (it is not safe to lower and toprope for the second to clean, because rocks will likely rain down on the belayer.) Just to the right of where the climb tops out are two large hexes with tat for the rappel. We added a new, second layer of tat.