Many fucks were said
Almost a What the Fucker
Protection? What's that?​
Here are a few things we encountered with this climb.

​Pitch-By-Pitch
First thing I'm going to say is our beta doesn't mean shit. For all I know I climbed half the climb off-route and all my bad runout experience was because I did it wrong. Consider this a regurgitation of our experience that may or may not be helpful to anyone.

The second thing I will share is, nothing was "obvious" to us until about pitch 4. Either we completely missed some major keys, clues, and queues described by the guidebook and Mountain Project beta, or they overstated the "obviousness" of things like ledges and cracks.

I also do not know how we ended up doing this climb in 6 pitches instead of 7. We were not purposefully trying to combine pitches. In fact, I felt like I had to truncate a pitch, stopping to build an anchor "early" because of rope drag (see the topo where I noted where we belayed because of rope drag.) In hind sight, I guess it wasn't "early." In Mountain Project people talk a lot about combining pitches - even whittling it down to 4 rope-stretching pitches with a 70m. All I can say is those people must have done this climb before and had the beta down to be able to do that (and they enjoy rope drag).

Here goes pitch-by-pitch:
Pitch 3 (Lead by Stef - 60') - I could probably repeat a lot of what I said about P1 here. I started off in a crack that died then Rick said "I think there's another crack farther to the left." So, I had to traverse a long distance left unprotected to find another crack. I cut over left too high and didn't use a long enough sling on my last two pieces of pro and I experienced some pretty bad rope drag. I had considered backtracking and down-climbing to switch out slings, but felt that was too risky. Out of necessity, once I reached the other crack, I had to build an anchor. I didn't know it at the time, but the crack where I built the anchor wasn't too far from where I needed to be.

At the time, though, I was frustrated as hell. I could see the top of Rick's head and it looked like I only went up about 30 or 40 feet (even though more rope was out than that because of the traverse.) I felt like my "fuck up" was going to add a small "unnecessary" pitch - turning a 7-pitch climb into an 8 pitch climb. Little did I know, with the way we were doing the pitches, it would end up being a 6-pitch climb.
Pitch 4 (lead by Stef - 200') - This was the straightest, most obvious, consistent crack I had seen all day. I could also see two trees from the base, one to the right and one directly above to the left. Handren talks about "weaving around the slab above using wide cracks and the faces in between" and ending up at one of the trees (I think it was the right one, which is lower down and at the base of the chimney). Honestly I had no idea where I was, but I had had enough of traversing and weaving and sussing out pro 30 feet above my last piece. I was going to climb a straight, fucking crack damn it. And I was going to end up at the upper tree come hell or high water.

It was strange because the tree looked deceptively close, but that pitch used 100% of our 60 meter rope and then some. Rick ended up having to simul-climb for about 10 feet for me to reach the tree. The rope drag required me to step up with all my might for the last 20 or so feet. A few times I thought I was going to fall backward because of how badly the rope was pulling me down. But I made it - then there was the arduous task of pulling up 60m of rope with rope drag from hell. 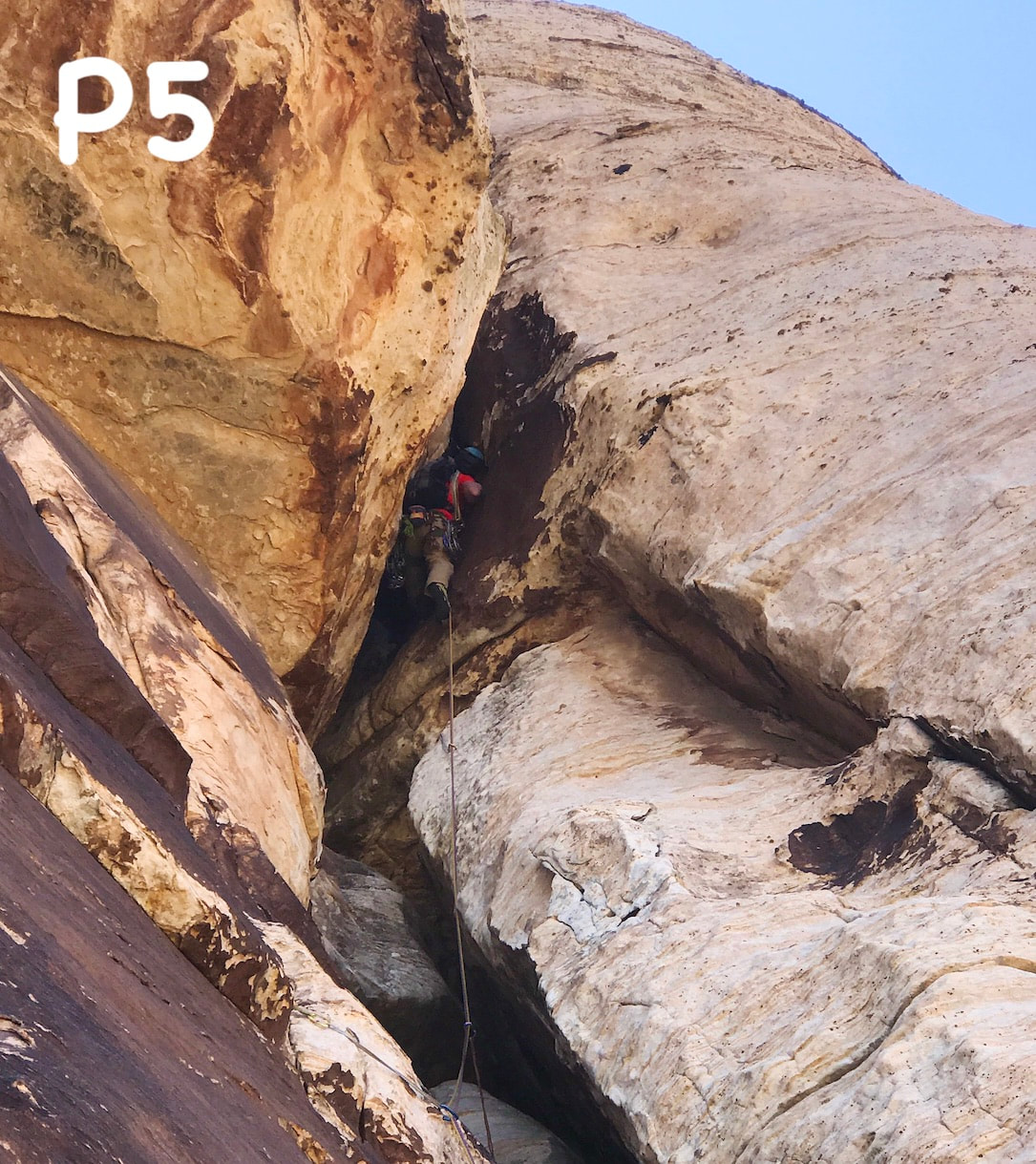 Rick leading the "choof" pitch - the chimney roof. Pretty tricky and heady above your pro.