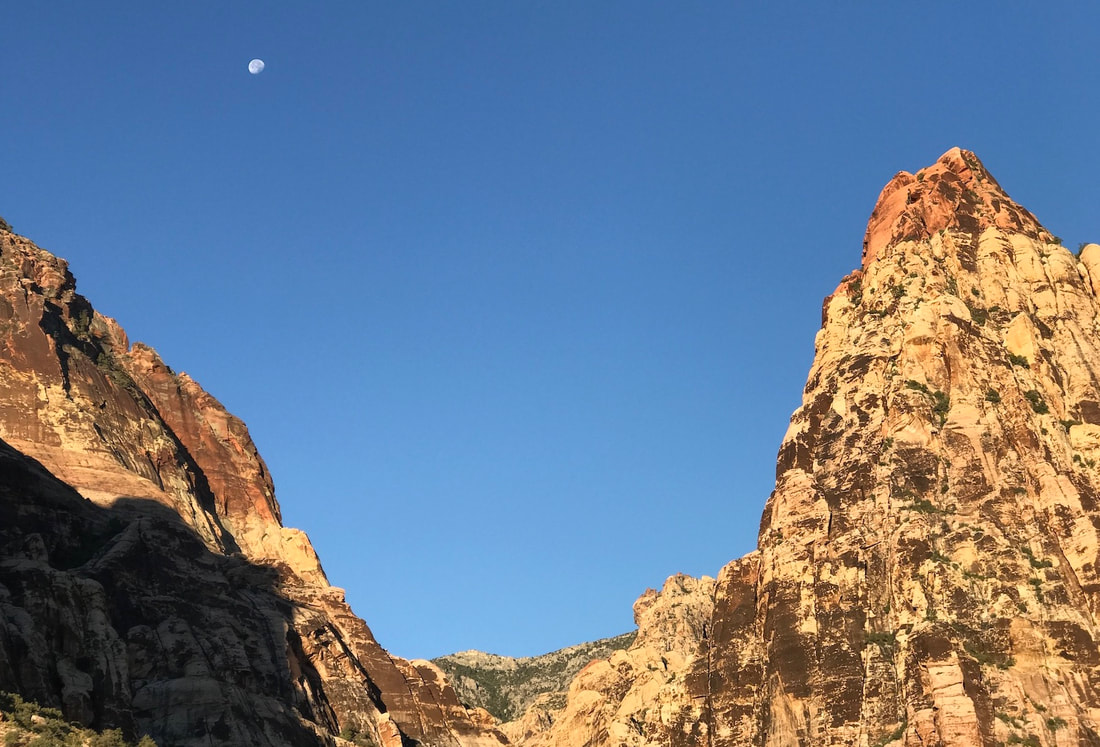 ​Although on a big ledge, these anchors are actually in a really weird spot - both awkward to access and difficult to protect while getting there. The anchor location also makes things weird for the pitch 2 leader (more on that in a bit,) If I did this climb again, I would NOT use these bolted anchors. I'd probably build an anchor in the vicinity on the actual climb.

There is a second tat/rappelling anchor about another 40-50 feet up. If the P1 leader tried to get to that and you are using a 60 m rope, the belayer needs to be prepared to simul-climb for about 20 feet and then secure him or herself once the lead is taken off belay. If you use a 70m rope you won't need to simulclimb, but be sure to bring a tag line for the two-rope rappel down Cat in the Hat.

Rick and I were swinging leads and we saw that it didn't make sense for him to come over to the bolted anchor. So ,he put in a couple of pieces to secure himself just below where you'd cut across to access the anchors. I kept him on belay, tightened the rope, then attached the remaining gear to the rope and slid it down to him.

​Because the bolted anchor is so far off route, Rick had to NOT place any gear for the first 15-20 feet or so,and then use an extra-long sling in the first piece to ensure that the rope would not bind itself around the rock between the anchor and the actual climb (i.e. so it would swing freely and go upwards in a straighter fashion.) Needless to say, a lack of protection "on purpose" like this was non-ideal.

The crux of pitch 2 is near a permanently stuck cam (which you can clip), then you go past the tat rappel anchor, and up into an alcove. From the alcove, go right up the smaller crack (don't go left up the chimney). The pitch ends at a tree.

After pitch 2 we wanted to continue up and finish the last pitch that you can rappel down (and not have to do the walk-off) of Cat in the Hat (this was the pitch we skipped when we did Cat in the Hat because it was too dang hot...). However, there was a party in front of us on Cookie Monster (which we initially needed to wait for) AND there was a party on Cat in the Hat. We could hear voices above us, but because there is not a clear line of sight, we weren't sure if there was a congo line on that last pitch. Since we had chosen to do this climb in the afternoon (because the temps were still warm and we wanted to climb in the shade), we were concerned about more waiting and losing daylight. So, we decided to stop there and head over to the Cat in the Hat Anchors for the rappel.

Throughout this write-up I mentioned multiple rappel anchors on Cookie Monster. Yes, you can rappel this route (you need two ropes), but considering our rope got stuck not just once but twice on this route (again see video), we opted to do the "traditional" decent - rappelling Cat in the Hat (which also requires two ropes.)

To get to the Cat in the Hat anchors from the top of P2 Cookie Monster, go climbers left at the tree (thorough an opening in the rock). There is about 30 feet of down climbing, some of it spicy, so we stayed roped up and placed gear accordingly to protect the follower. There are several bushes, but keep down-climbing until you see a small tree with multiple tat. This is the first rappel spot. Rappel down with two ropes to a very large ledge.

To locate the next set of anchors, from the rappel turn left, then go back, then left towards some large boulders. Scramble down those boulders following the line of least resistance. This is not really exposed climbing, so if you encounter dangerous exposure, that is probably not the correct way. This scrambling will take you down to a second ledge where you will veer right (skier's right) and then see bolted anchors about head-high on a small wall. From here is a two-rope rappel to the ground.

Having descended this way multiple times, so far we have not yet had our rope get caught.