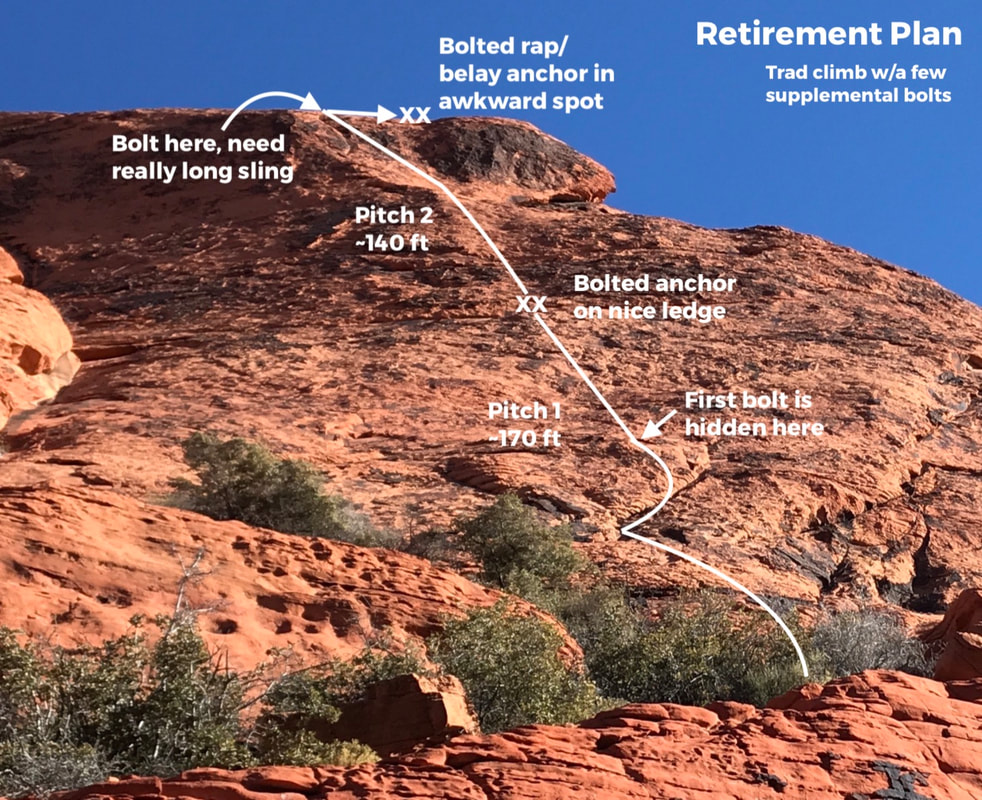 The key features of this climb are:
+ Fiddly gear! There's not a lot of places for pro. When you find a possibility, you have to take it, which then often requires fiddling with the gear. Be prepared for creative protection - slinging a chicken head, using nuts and tricams in small pockets or petina slots, small cams. I think the largest piece I placed a #2 or #3 in the crack near the top of pitch 2.
+ climbing style is featured petina face with some slab in the mix.
+ "mostly" solid rock - except when it's not- there's plenty of stuff I wouldn't trust at all (hollow with cracks that go almost all the way around the feature). Avoiding questionable rock certainly adds to the challenge. I don't think this climb sees enough traffic to clean off the bad rock. On the rappel Rick accidentally knocked off a dinner-sized plate of rock (and we tend to be extra conservative/cautious with bad rock.)
+ Rope drag is a bitch on both pitches because of the low angle!
+ Even though the climb is mostly low angle, it does have some spice here and there.
+ The bolting is a bit funky - seems like a really tall person bolted it and sometimes the bolts are way off to the side of where the holds are.
+ You need two 60m ropes to rappel (two raps).

There are a few supplemental bolts on this pitch. It's difficult to see the bolts from the ground. The photo above shows the location of the first bolt (which is hidden on top of the "hump.") Once you find the first bolt, you can see the others.

The first pitch ends at a set of bolted anchors on a nice ledge.

​Pitch 2 also has a few supplemental bolts. The last bolt before the anchor is in an odd spot. Before topping out, try to place a piece of pro in the upper end of the crack to protect your last moves, because you will go a little ways over some slab before reaching the last bolt. The last bolt is considerably above the anchor, which is also another 15 or so feet to the right. I used a triple sling and because of the right angle, but it still added to the already problematic rope drag.

The anchor is below where it's comfortable to sit and belay. I placed a small cam in a crack behind me to attach me to something above (because being in a non-shock-loading PAS -Personal Anchor System - I didn't want my only protection so far below me.) I also clove-hitched the rope to the anchor system below to avoid the PAS shock-loading concerns. It's a bit of an awkward set-up for sure. Another option is to tie into the anchor and climb down to the tiny ledge just below the anchor, it's just not as comfortable.