Our absolute worst trail rating is GLWT ("good luck with that.") That means either we could not figure out how to get the the crag without dying from RIP exposure or the approach up to that point sucked every last ounce of umph from us such that our bodies said, "No more, we still have to turn around and go back!" (Now, granted, often when we went deep into a canyon, we didn't just head straight back into the canyon, we mapped other physically arduous approaches along the way. So, we recognize that we may have been overly exhausted by the time we reached a certain point.)

Fortunately there are not that many Soul Crushing trails we have encountered. And, sometimes those ultra-heinous trails are avoidable - like at the end of First Creek Canyon in Red Rock Canyon, NV. The image below shows our raw GPS data (the black lines), which represent the exact path we took to get from point A to point B. The squiggly line is actually a soul-crushing trail because of super thick thorny and dead vegetation, mixed in with steep boulders, and very difficult path-finding. That is compounded by being at the end of an already long approach. Now, the less-squiggly line is actually a la-de-da-cruiser trail. Granted, we did not discover that easy trail until after having already forged through the trail-from-hell.

We got sucked into the trail-from-hell because it looked like there a was a path that followed the cliff to get from the left side of the Slippery Apron to the Right side of the Slippery Apron. In most cases at a crag, there is a connecting trail between the left and right sides of a commonly named wall, so logically it made sense to see where that "trail" went. And, because of the existence of a faint trail, it appears other people made that logical mistake.

But now, we have it conveniently recorded for the benefit of other climbers. If you are at Slippery Apron L and want to get to Slippery Apron R, do NOT go into the bushes along the Slippery Apron wall, instead go back down into the wash and then up. It may seem out of the way, but it will save you about an hour and a headache the size of New York.

Joshua Tree has its fair share of heinous approaches too, primarily in the form of boulderfields. There is a surprising variation in the difficulty of one boulderfield compared to another and the level of difficulty is rarely obvious from the bottom. Some are relatively easy, others are particularly scary fields I call "hellboulderado fields." Sometimes a single boulderfield changes personality, where it is easier at the bottom and scarily-heinous as you near the wall. On our maps we indicate the difficulty level we encountered with each field, giving climbers fair warning. I have written about a particularly frustrating experience with a very difficult boulderfield in JTree.

NOTE ON THESE IMAGES: The GPS trail data is being shown over a satellite image to assist with visual references only. Our maps do not use satellite imagery as the background for several reasons (see the section titled "Map Processing and Satellite Imagery" on the Methodology page of our website to learn why).

Image 1: Shows the raw GPS data of the paths that were actually walked.
Image 2: Shows the post-processed trails, with the red trail indicating a "Soul Sucking" path. In this case you can clearly avoid that terrible path (and, on the map, we will discourage people from going on the red trail).
Image 3; Joshua Tree

Hover over or click on images to see comments: 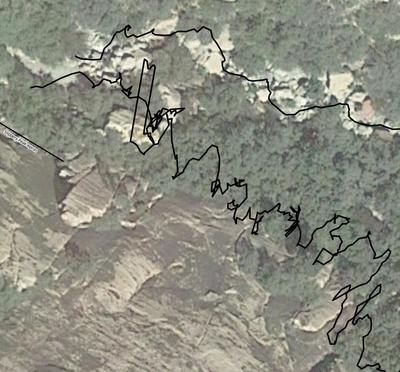 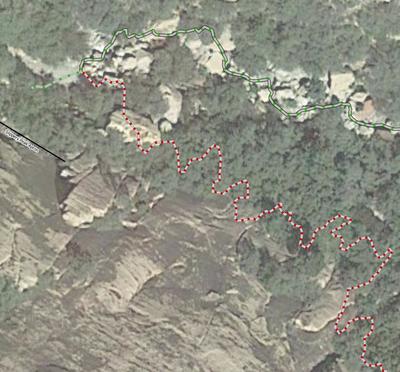 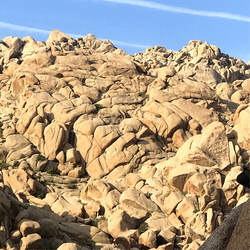